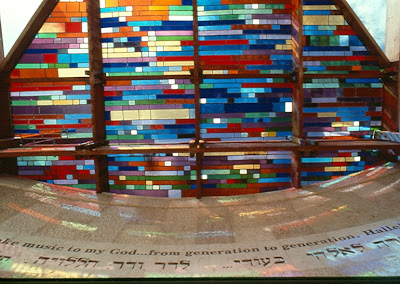 The Future of Art in a Digital Age:
From Hellenistic to Hebraic Consiousness
By Mel Alexenberg, Intellect Books, UK, 2006

Mel Alexenberg is Professor of Art and Jewish Thought and Head of the Creative Arts Program at Emunah College in Jersalem. He has written an extraordinary book which offers a prophetic vision of art in a digital future. Expanding upon the emerging artistic prospects made possible by technology, it explores new directions in art that have arisen between the planes of science, technological development, and cultural expression.

Focusing upon the epochal shift from pre- to post-modernism, the author examines the interrelations between digital age art and Jewish consciousness. The contours of art in a postmodern era shape the framework of this book. Using both analytic and alternative Jewish methodologies, the author offers a diverse and exciting range of theories regarding the expansion and redefinition of art in a digital dimension. The author’s personal artwork – a vibrant fusion of the mystical and technological – is included in the book to exemplify and complement the theoretical basis of the study. His is a revolutionary investigation into the aesthetic form that imaginatively envisages the vast potential of art in a cyber future.

Excerpt from The Future of Art in a Digital Age
The ingathering of the Jewish people into their ancestral homeland of Israel at the time that many other peoples are being dispersed into new host countries would seem to be a countertrend to the powerful forces of globalization. However, the rebirth of the Jewish State and the ingathering of the exiles plant roots that provide the sure footing required to play the fast-moving globalization game. A half-century after its rebirth, Israel has become as a major player in the global world of hi tech. Jewish history is the prototype for the creative tension and energetic interplay between subjugation and freedom, between local action and global consciousness, between narrow unidirectional thought and open-ended systems thought, and between being rooted in one’s own culture and exploring others. This tension and interplay can become the stimulus and raw material for forging new directions for art in our era of globalization.

Posted by Mel Alexenberg at 1:43 PM