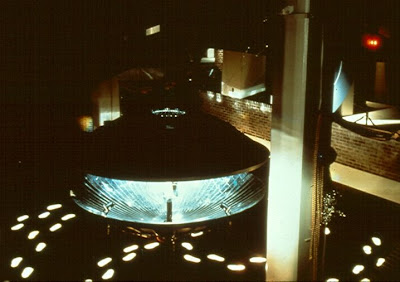 The Future of Art in a Digital Age
From Hellenistic to Hebraic Consciousness
by Mel Alexenberg, Intellect, Bristol, UK, 2006

This book is as much about religion, specifically Judaism, and spirituality as it is about art, and in a covert way, it is also highly political. Like the Torah itself that Alexenberg refers to regularly, the book is complex. He writes in a lively, engaging style, and whilst the book is heavily biased, I found it informative, optimistic, and spiritually refreshing.To Alexenberg’s credit, his bias is fully and proudly declared. He is a practicing and devout Jew, and this, of course, tempers his entire philosophical outlook.

He finds many profound similarities between Hebraic consciousness and postmodern art, which are amazingly insightful and clearly explained. The postmodern art that he chooses to discuss is the positive, optimistic minority. Much of postmodern art engages the viewer in a hermeneutic vicious circle of depression, hopelessness, and nihilism. If you doubt this, see The Aesthetics of Disengagement: Contemporary Art and Depression (reviewed Leonardo Reviews, June 2006).

As the subtitle, From Hellenistic To Hebraic Consciousness, suggests the book covers a lot of history, specifically religious and art history. Alexenberg looks at the "End of Art" concept in which he argues that we are not witnessing the end of art, "but the end of art derived from a Hellenistic structure of consciousness. The contemporary redefinition of art is emerging from a Hebraic consciousness as expressed through the Oral Torah" (p. 33). Shame nobody told the rest of the non-Jewish world!

It is interesting to note Alexenberg’s acute awareness of the Islamic-Arabic culture, so much so that one of his own major artworks deals with the Middle East "situation" specifically. Cyberangels: Aesthetic Peace Plan for the Middle East is detailed in Leonardo (p. 185) vol. 39, no. 3, 2006 and also in this book (p. 54-57), together with many other of Alexenberg’s artworks. This work compares Israel, a tiny land within the huge Arab world, with the "fault" deliberately woven into traditional Muslim kilims. Israel needs to exist and be respected in accordance with the Islamic concept that only Allah is perfect. This artwork is brilliantly conceived, the concept of helping achieve Middle East peace through a visual artwork, laden with deep and complex philosophical and political information, is surely unique and perhaps the only possible way this may be achieved.

This book as the back cover states is, "A revolutionary investigation into the aesthetic form that imaginatively envisages the vast potential of art in a cyber future." It is worth mentioning that the book is not specifically about digital art but art generally in our digital age. Let’s hope that such a future embodies spiritual, not necessarily religious values, which will enable us to realise our full potential. Spiritual is not used here as synonymous with religion. The wisdom expressed throughout The Future of Art in A Digital Age will help in its own small way to help us realise this potential.
Posted by Mel Alexenberg at 9:47 PM