Writing to Ahmadinejad based on Islam 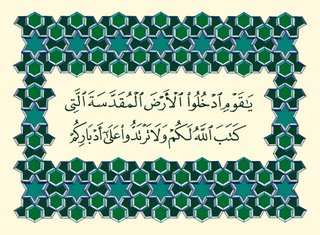 Your aim to wipe Israel off the map defies the values of Islam expressed in the Holy Koran and through Islamic art.

In Islamic art, a uniform geometric pattern is purposely disrupted by the introduction of a counter-pattern to demonstrate that human creation is less than perfect. Based upon the belief that only Allah creates perfection, rug weavers from Islamic lands intentionally weave a small patch of dissimilar pattern to break the symmetry of their rugs. The Islamic artisan does not want to be perceived as competing with the perfection of Allah.

Perhaps you see a continuous pattern like a beautiful Islamic rug running from Morocco on the Atlantic Ocean to the eastern borders of Iran. Shift your perception to see Israel, not as a blemish on the great Islamic rug, but as a small counter-pattern needed to realize Islamic values.

The ingathering of the Jewish People into its historic homeland in the midst of the Islamic world is the fulfillment of Mohammed’s prophecy in the Koran (Sura 17:104): “And we said to the Children of Israel, ‘scatter and live all over the world…and when the end of the world is near we will gather you again into the Promised Land.”

Switch your viewpoint to recognize the sovereign right of the Jews over the Land of Israel as the will of Allah as expressed in the Koran (Sura 5:20-21): “Remember when Moses said to his people: ‘O my people, call in remembrance the favor of God unto you, when he produced prophets among you, made you kings, and gave to you what He had not given to any other among the people. O my people, enter the Holy Land which God has assigned unto you.’”

As a devout Muslim, you should recognize the State of Israel as a blessing expressing Allah’s will.

Prof. Menahem Alexenberg
College of Judea and Samaria
Ariel
Posted by Mel Alexenberg at 10:04 AM