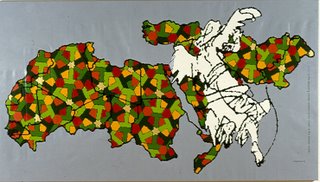 Exhibition at Robert Guttmann Gallery of the Jewish Museum in Prague
www.jewishmuseum.cz/en/acyberangels.htm

Artistic Solution to Aesthetic Problem
The lack of peace in the Middle East can be seen as an aesthetic problem that requires an artistic solution. It calls for a shift in perception that can be derived from Islamic art and thought.

In my Cyberangels: Aesthetic Peace Plan for the Middle East exhibition, human creativity at its best in both Islamic and European cultures encounter each other. The beautiful patterns of Islamic art meet Rembrandt’s angels* in an aesthetic peace plan. The exhibition at the Robert Guttmann Gallery of the Jewish Museum in Prague juxtaposed my digital and systems artworks with authentic carpets from Islamic lands.

Perceptual Shift
The exhibition invites a perceptual shift through which Muslims see the State of Israel as a blessing expressing Allah’s will and Christians see it as the Divine fulfillment of the biblical promise of the Land of Israel to the Jewish people. Digitized Rembrandt angels* emerging from Islamic geometries are electronic age messengers drawing out the beauty in European and Islamic cultures rather than the ugly anti-Semitism that plagues them.

Art as Mirror of Culture
Historian of Islamic art, Elisabeth Siddiqui, writes in the Arabic journal Al-Madrashah Al-Ula that art is the mirror of a culture and its worldview. She emphasizes that there is no case to which this statement more directly applies than to the art of the Islamic world. “Not only does its art reflect its cultural values, but even more importantly, the way in which its adherents, the Muslims, view the spiritual realm, the universe, life, and the relationships of the parts to the whole.”

Disruption of Pattern
The repetitive geometric patterns in Islamic art teach Arabs to see their world as a continuous uninterrupted pattern that extends across North Africa and the Middle East. Unfortunately, they see Israel as a blemish that disrupts the pattern. From this perspective, Israel is viewed as an alien presence that they have continually tried to annihilate through war, terrorism, and political action. Palestinian Authority television labels Israel as a “cancer in the body of the Arab nation.” Its emblems, publications, schoolbooks, and web sites show the map of Israel labeled Palestine. Israel does not exist. The leaders of Hamas and Iran call for Israel to be "wiped off the map." Former Iranian president Rafsanjani expressed his longing for a day when an Islamic nuclear weapon could remove the “extraneous matter” called Israel from the midst of the Islamic world.

The major obstacle to peace between Jews and Arabs is the Islamic world’s rejection of Israel as a Jewish state in its midst. After more than a half century of independence, the State of Israel still does not exist on maps produced in Islamic countries. All road maps to peace in the Middle East will come to a dead end until the sovereign State of Israel is included in Arab maps.

Necessary Counter-Pattern
Fortunately, the perceptual shift needed to lead to genuine peace can be found in Islamic art and thought. In Islamic art, a uniform geometric pattern is purposely disrupted by the introduction of a counter-pattern that demonstrates human creation as less than perfect. Based upon the belief that only Allah creates perfection, rug weavers from Islamic lands intentionally weave a small patch of dissimilar pattern to break the symmetry of their rugs. Sheikh Abdul Hadi Palazzi, Imam of the Italian Muslim community who holds a Ph.D. in Islamic Sciences by decree of the Saudi Grand Mufti, proposes that the idea of underlying the Divine infinitude and the human fallacy by including some voluntary counter-pattern in works of art is common in Islamic art, and extends to tapestry, painting, music, architecture, etc. The Islamic artisan does not want to be perceived as competing with the perfection of Allah.

In “Islamic Textile Art: Anomalies in Kilims,” Muhammad Thompson and Nasima Begum write that the weavers of Moroccan kilim rugs, “devout Muslim women, would not be so arrogant as to even attempt a ‘perfect kilim’ since such perfection belonged only to Allah. Consequently, they would deliberately break the kilim’s patterning as a mark of their humility.”

Patterns of Life
Indeed, breaking symmetrical patterns characterizes life itself. All living organisms exhibit the principle expressed by the renowned biologist Paul Weiss as “order in the gross with freedom of excursion in details.” Every grape leaf, for example, is a unique variation of a general pattern. No two grape leaves on the same vine are congruent. Although a whole leaf gives the overall appearance of symmetry, a closer look at the details reveals a different venation pattern in each half of the leaf.

Islamic World Needs Israel to Realize its Values
Peace can be achieved when the Islamic world recognizes that they need Israel to realize their own religious values. Israel provides the break in the contiguous Islamic world extending from Morocco to Pakistan. Accepting the Jewish State as the necessary counter-pattern demonstrates humility and abrogates arrogance before Allah and honors the diversity evident in all of God’s creations. The ingathering of the Jewish people into its historic homeland in the midst of the Islamic world is the fulfillment of Mohammed’s prophecy in the Koran (Sura 17:104): “And we said to the Children of Israel, ‘scatter and live all over the world…and when the end of the world is near we will gather you again into the Promised Land.”

The State of Israel needs to be drawn on Islamic maps as a small break in the continuous pattern running from the Atlantic Ocean to the borders of India. If the contiguous Islamic world were the size of a football field, Israel would be smaller than a football placed in the middle of the field.

Land of Israel Deeded to the Children of Israel
Sheikh Palazzi quotes from the Koran, Sura 5:20-21, to support the Arab world’s need to switch their viewpoint to recognize the sovereign right of the Jews over the Land of Israel as the will of Allah: “Remember when Moses said to his people: ‘O my people, call in remembrance the favor of God unto you, when he produced prophets among you, made you kings, and gave to you what He had not given to any other among the people. O my people, enter the Holy Land which God has assigned unto you, and then turn not back ignominiously, for then will ye be overthrown, to your own ruin.’”

According to the Imam, Islam’s holiest book confirms what every Jew and Christian who honors the Bible knows: The Land of Israel was divinely deeded to the Children of Israel. The Jews are the indigenous people of the Land of Israel who have continuously lived there for more three millennia despite the conquests of numerous imperialist empires. Jews are from Judea. Arabs are from Arabia. The Arabs are blessed with 22 other countries.

Paradigm Shift
A paradigm shift can transform the perception of Israel as a blemish to seeing it as a tiny golden seed from which a lush green Islamic tree has germinated and spread its roots and branches across North Africa and the Middle East.

Professor Khaleed Mohammed, expert in Islamic law, explains: “As a Muslim, when I read 5:21 and 17:104 in the Quran, I can only say that I support that there must be an Israel. The Quran adumbrates the fight against tyranny and oppression, using the Children of Israel as an example, indeed as the prime example.” Tashibih Sayyed, Editor-in-Chief of Muslim World Today writes: “I consider the creation of the Jewish State as a blessing for the Muslims. Israel has provided us an opportunity to show the world the Jewish state of mind in action, a mind that yearns to be free…. The Jewish traditions and culture of pluralism, debate, acceptance of dissension and difference of opinion have manifest themselves in the shape of the State of Israel to present the oppressed Muslim world with a paradigm to emulate.”

A Fresh Metaphor for Peace
Peace will come from a fresh metaphor in which the Arabs see Israel’s existence as Allah’s will. A shift in viewpoint where Israel is perceived as a blessing, as the necessary counter-pattern in the overall pattern of the Islamic world, will usher in an era of peace. Peace will come when the Islamic world recognizes Israel as the realization of its own values and draws new maps that include Israel.

Angels of Peace
* The Hebrew language links art and angels in our digital age. The biblical term for “art” M’LAeKheT MaKhSheVeT is a feminine term literally meaning “thoughtful craft.” Transformed into its masculine form, it becomes “computer angel” MALAKh MaKhSheV. The spiritual concept “angel” and reshaping the material world “craft” are united in the biblical image in Jacob’s dream of angels ascending and descending on a ladder linking heaven and earth.

Malakh Shalom (Hebrew) and Malak Salam (Arabic)
We can learn from the Hebrew words for “angel” MALaKh and “food” MA’aKhaL being written with the same four letters that angels are spiritual messages arising from the everyday life. Before partaking of the Sabbath eve meal in their homes, Jewish families sing, “May your coming be for peace, ANGELS OF PEACE, angels of the Exalted One.” The song begins with the words shalom aleikhem (may peace be with you). Shalom aleikhem is the traditional Hebrew greeting when people meet. It is akin to the Arabic greeting salam aleikum. Indeed, the word Islam itself is derived from the same root as salam (peace). May the Hebrew Malakh Shalom and the Arabic Malak Salam be recognized as one and the same Angel of Peace.